In a pilot frame, which was implemented under the pilot project, disassembly and reusability resulted in approximately 35% cost savings and 50% lower emissions, regardless of whether the entire floor structure was implemented with wet or dry joints.

At the end of 2021, Peikko implemented a pilot project in which a load-bearing structure of concrete elements was installed, dismantled, and reinstalled.

Consolis Parma and TTS were also involved in the project which was carried out in Vantaa, Finland. The purpose of the project was to prove that the connecting technology between load-bearing structures enables easy dismantling and reassembly of concrete elements.

Sustainable development and carbon neutrality are globally concerned topics. The European Commission has set EU-wide targets in order to become carbon neutral by 2050, which can be found in the European Green Deal Strategy [1]. To support these targets, the European Commission has also published the document Circular Economy action plan [2], in which concrete ways to achieve targets in different value chains have been laid out. One of these value chains is the construction sector, which produces over 35% of all EU territory waste as well as 5-12% of the world’s greenhouse gas emissions [2]. In addition, according to Eurostat [3], in 2018 the construction sector used up 29% of all non-renewable raw materials. These figures indicate the huge pressure on the construction industry to find more sustainable methods of operation.

One aspect of circular economy is to keep products, components, and materials at their highest utility and maintain their value throughout the entire life of cycle of a building [4]. Structures, and their connections, can be designed to enable successful dismount as well as to provide regeneration flexibility for new buildings. The potential of existing buildings can also be utilised if their structures are found to meet modern requirements. These methods could effectively reduce the need for new structures and buildings whilst also reducing both greenhouse gas emissions and the consumption of raw materials. 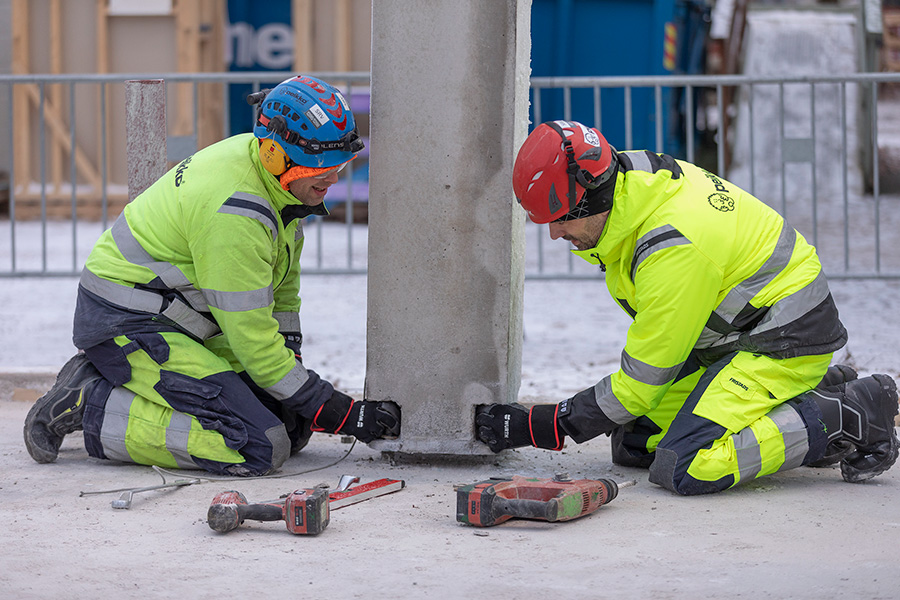 The demountability and reusability of steel structures has already been studied, for example, in the EU-funded PROGRESS project [5]. The very small manufacturing tolerances of steel structures enables the use of geometrically precise connections, which are dismantled as easily as they are installed. The situation is different for concrete structures – for example, the connections between concrete elements require installation tolerance on site. For this reason, a joint is often left between connected elements, which must be filled on site with load-bearing grout material. The grout, which hardens in the joint, makes dismantling more difficult and may even prevent the reuse of structures.

“We joined this project because sustainable and high-quality construction as well as the boosting of circular economy are central themes for us. Maximising the life cycle of buildings and building elements are the most important ways to improve the ecology of buildings. Creating demountable solutions and the preliminary planning of reuse help to extend the life cycle in the new building”, comments TTS Development and Customer Service Manager Jukka Jaakkola.

The side dimensions of the frame were 6 m x 8 m, and the height of the concrete columns was 3 m. The load-bearing intermediate floor consisted of 320 mm high DELTABEAM® Green composite beam profiles (steel material recycling rate at least 90%) and Parma’s low-carbon hollow slabs, which are 50% lower in CO2 emissions than standard hollow slabs due to PARMA Green™ technology.

“Circular economy and emission reductions are the most important elements of our environmental strategy. In particular, the reuse of concrete elements fascinates us because this technology has not been significantly considered in Finland, despite it creates possibilities to benefit from a longer life cycle of concrete”, says Consolis Parma Chief of Technology Juha Rämö.

Other slab field was traditionally grouted, and the other was executed mainly with dry joints. Both the joints between the DELTABEAM® Green composite beams and the concrete elements, as well as connections between elements, were designed to allow easy dismount and reassembly of structures.

During the dismount process, we sawed open grouted joints, broke down hardened grout pads in the column connections, and opened the bolted connections. Before dismantling, we installed temporary supports for the DELTABEAM® Green composite beams and column elements. We lifted the detached structures apart in a controlled order and stacked them next to the installation site. The last step involved breaking down and cleaning the voids and sides of the hollow core units so that we could also reuse the slabs with wet joints. None of the components were damaged in the process.

During the reassembly, we placed all disassembled components in their original places and reconnected the bolted joints. The entire reassembly took one morning and did not require any significantly different steps compared to the first installation. We can conclude that modern current connection technology already enables the dismount and reuse of concrete elements. However, does the dismount of structures achieve economic viability, or does reusability have a clear effect on reducing environmental load? 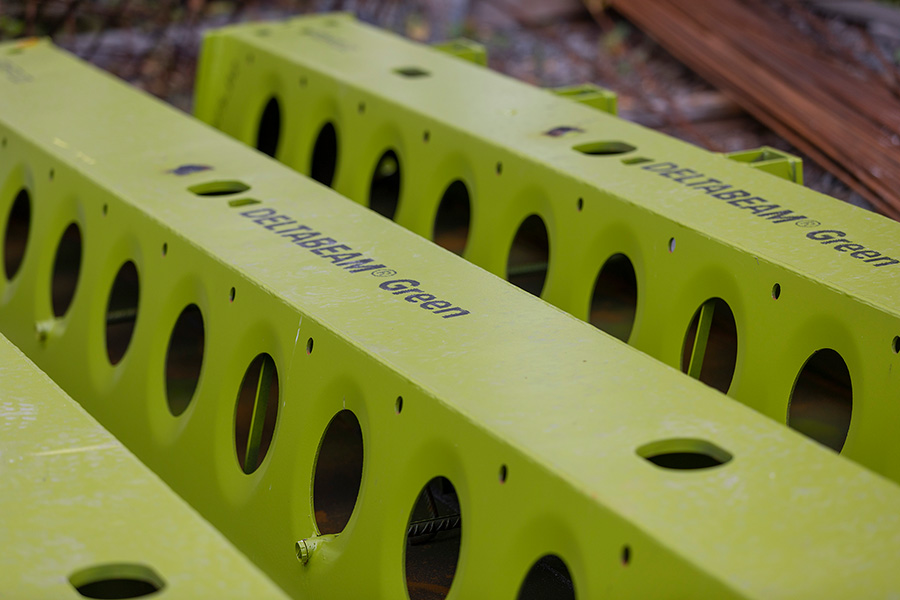 Reuse is both economically and environmentally friendly

The material and process costs relating to dismount and installations could be determined from both an economic and environmental point of view. We made a comparison between two scenarios:

For scenario 2, we assumed a similar precast concrete frame where, however, the connection technology does not support the dismount and reuse of structures. In this case, the reassembly of a similar frame would require the delivery of completely new components.

We estimated economic effects by calculating the costs associated with materials and processes (€) while assessing environmental effects by determining carbon dioxide emissions (kgCO2). We estimated emissions relating to materials and structures from the perspective of manufacturing and transportation. The conservatism of the assessment was enhanced by the fact that we did not consider the demolition process of the reference frame according to scenario 2 (e.g., with a bulldozer).

We came to the conclusion that, although considering dismount and reuse in connection design (scenario 1) produces additional costs and CO2 emissions in both the first construction phase and dismount processes (diamond sawing, using demolition hammer), economic savings and environmental benefits are significant when compared to ordering and delivering entirely new elements (scenario 2). In a pilot frame, which was implemented under the pilot project, disassembly and reusability resulted in approximately 35% cost savings and 50% lower emissions, regardless of whether the entire floor structure was implemented with wet or dry joints. 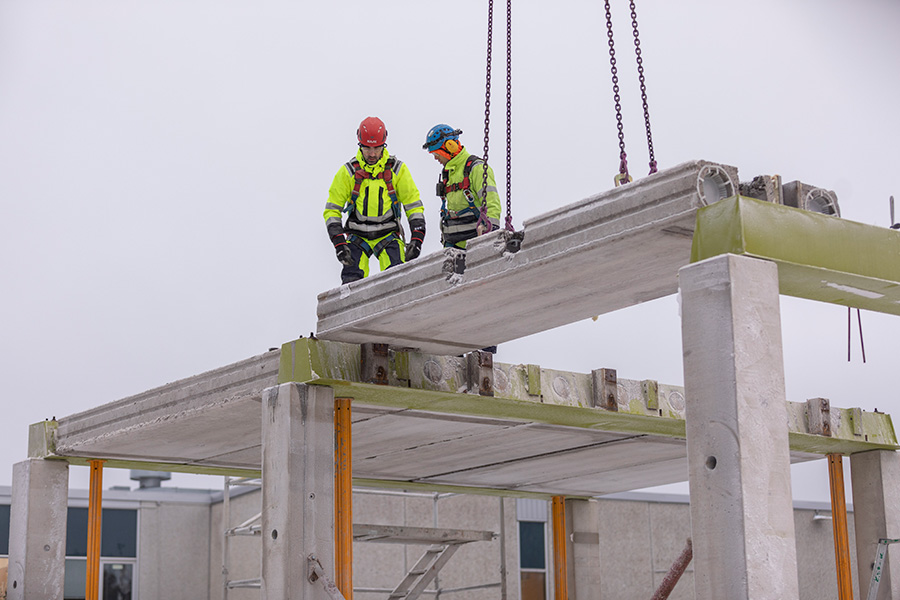 Keeping our eyes on the future

By executing the pilot project, Peikko and its partners took a significant step towards a reality where the reuse of concrete elements is common practice. Although there is still a way to go from load-bearing frame structures to entire buildings, the reusability of frames alone is a significant improvement over the current situation. The next logical step is to utilise the information obtained in the pilot project to a more complex degree. This includes, for example, the installation of wall elements and surface structures on top of load-bearing slabs. Rämö, from Consolis Parma, says that he agrees with implementing such pilots in practice, not forgetting to take into account the benefits of reusability in life cycle calculations.

Jaakkola, TTS, deems it important that professionals of the field are taught how to dismount and reassemble and reinstall structures from the get-go. Already experienced professionals could be offered additional training.

”First and foremost, we must finalise the concept, complete with instructions, and get clients to understand the long-term benefits of reusing structures. The overall concept should take into consideration the recommendations for the implementation of surface structures on load-bearing structures, so that easy dismantling and reuse can be taken into account more comprehensively”, Jaakkola states.

Although it would, essentially, be possible to reuse dismounted elements for the same purpose, finding a new use and purpose can still be challenging if it is not planned or known in advance. The systematic utilisation of dismounted and used elements as part of a new, modern building stock may require a new type of business model in which used structures are stored, and the associated database maintained. The potential client could search the database for structures suitable for their own use and purchase used structures at a lower price. The database should, therefore, contain information on, at a minimum, the dimensions, materials, manufacturing time, and condition of the stored structures.

Have a look at the video made during the tests:

HPM® Rebar Anchor Bolts are used to anchor concrete or steel structures and machinery into concrete base structures. The product range is suitable for moderate loading conditions. This multipurpose anchor bolt is widely approved and adopted.

DELTABEAM® is a composite slim-floor system for multi-storey buildings of any kind. It allows flexible lay-outs through the whole life cycle of the building, and easy HVAC installation.

Precast technology has a number of benefits, but somehow, in most construction cultures, these benefits do not necessarily lead to increased use of th...

Behind the Scenes: DELTABEAM SELECT Has a New Role in Design Automation

Information exchange with multiple software - the future of structural design?

Well planned is half done – safety on site

Peikko in North America: 10 M$ milestone in sales reached in 2016

Ready to face the wind in Norway!